It’s Wednesday, and yes you probably thought that I would have a falling out with keeping up with my blog, but you would be wrong!

I only had a four day work week, but that meant working longer days, which is fine because my three day weekend was awesome.

The first thing I had to attend to was a walkthrough of the new North Lawn with the newly installed work by Buckminster Fuller’s Fly’s Eye Dome – a massive dome structure. This was primarily because of the soon approaching event that the programming team needed to logistically plan for. It will be the first programmed event from CB involving the artwork and North Lawn.

After our walkthrough, Sara and I met with Mike, who is from the Bentonville radio station and has a couple of work hats, to discuss the rest of the upcoming summer events and the video projections he would feature. It was rewarding to have a laidback but highly productive meeting with someone with many connections.

The rest of my day was working toward organizing and counting numbers from the I-Connect event. Somehow there ended up being four copies of the same list of registered interns for the event with different people highlighted, so that took awhile to compile everyone onto one list.

I had to abruptly stop my work for the day because myself and the other CB interns had our HR orientation to CB. Like any other HR orientation, we are treated like paid employees with the same expectations, and a rundown on the values, mission, and pillars of the museum. My day was through after that!

Because the I-Connect event would not be the only event I would be responsible for logistics/numbers, Sara and I met with Angela. One of her responsibilities deals with the management of CB’s Tessitura program (it’s not my favorite thing to do), and I learned how I would transfer my work from the I-Connect event to documentation for CB and for the branch of Walmart responsible for their summer interns.

I did as much as I could for the rest of the work day dealing with Tessitura for the I-Connect event, but before I get on that ball it was time to set up for the Frank Lloyd Wright artinfusion insight. There had been a family friendly event that had started at 4 with kid friendly folk music, birthday hat making, and marshmallow and toothpick building- and we kept all of those materials out for the artinfusion portion of the night. The only things we did differently was reorganize the cocktail tables, set up easels with signs, and a welcome table at the entrance.

The event was casual with appetizers, bar, jazz music, and a special VIP access tour of the second floor of the Bachman-Wilson house. This was my first artinfusion event and I thought it as the ideal artinfusion event because it was integration of art with the casualness of the jazz music and socialization with people of the same age range.

Cleanup kinda sucked because I helped Kim take all the art supplies back to the education building which took some time and allowances from security (but only after dropping like a million toothpicks on the sidewalk).

Do you ever have those nightmares where you think you go to school naked or show up to work late? Well, the latter happened and I felt horrible. I had set my 4 different alarms across the room as normal but somehow I turned them all off or I had not set up them right… but I did not wake up on time. I managed to walk in the office a few minutes before 11 and refused to talk unless spoken to.

Getting past that hump and after some email checking and paper pushing I had a meeting over lunch (thanks public programming for another free meal!) with Sara, Emily, and a woman working with Kimberly-Clark who wants to be a sponsor and serve on the artinfusion council. For most of these kinds of meetings I sit in, listen, and observe. I piped up to say something, nothing too significant but it was relevant to what they were discussing.

Shortly after walking back from the sculpture forest to the office I sat in on a logistical meeting about the Moshe Safdie lecture event at the end of July. I’m SO pumped for that. My final thing of the day was beginning my research efforts towards one of my projects.

Today was the second Chihuly night! A few different factors that made a difference. Sara was not the event leader, but the entire education department’s adviser, Janelle. My job was still to follow her around and keep the timeline in check with everyone else. The weather was perfect with a comfortable 80 degrees and slight cool breeze. The bands were a Grateful Dead cover band and a Pink Floyd cover band. The crowd did not feel much different than the Saturday before, but just a significantly higher number of people.

Once an event starts, all you can do is hope nothing wrong happens, but also enjoy it. Janelle and I enjoyed dinner (another free meal!) while listening to the music. But we got back to it immediately and learned that the first band loaded out in the middle of the event- which goes against the contract… still happened though.

After that slip up I hung out at the craft tables for a large chunk of time making a garden pollinator from pipe cleaners and beads. I thought it was fantastic that not only children were making the craft but adults as well. It was an enjoyable activity, easy to do and self-taught without having to monitor people. 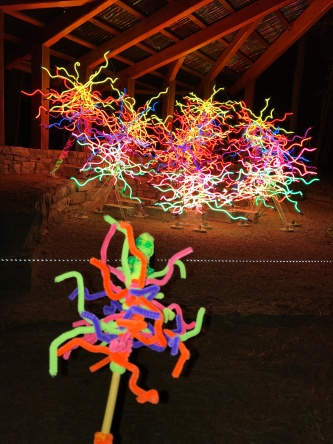 At the end of the night the Pink Floyd band saved their most popular and known song for last, but because it was already 10:05pm we had to stop them… should have kept track of time! Cleanup was just picking up trash and piling chairs. Super easy! Another day of walking 14,000 steps. HA.

A Sunday that felt like a Sunday! I slept hella in until like 1pm… but went for a short four mile bike ride. That was the only thing I did that day. Not ashamed what-so-ever.

Today was relaxing. Tyler and I had breakfast/brunch at his place before heading to the Ozark Mountains to Hawksbill Crag. I had read up on the site beforehand and thought it was a good daytrip and worth the time and effort to get there.

I followed Google Maps like any other good navigator should for their driver, but the way it first took us was the road entrance with a literal 45 degree angled dirt road that was barely manageable for a sedan to push through, so we turned around and took the long way to get there. On the bright side, the drive was gorgeous, tossing around us the mountains, up and down. It took an additional hour to get to the other entrance of the road. It was the same dirt road but the more manageable side.

After travelling down a 7 mile long dirt road with lots of rocks and potholes, going 35 mph we reached the trail head. Don’t believe the websites that say it’s like a 30 minute hike to the site. It was more of a 45 minute hike, one way. It was not an easy trail at all, more like an intermediate. There were moments that I contemplated how my body was moving the way it did without breaking, honestly. I sweat what felt like buckets, but we finally reached the point! This was quite a gem for being in Arkansas, I was quite surprised.

During the hike we were followed behind by a family of three from Oklahoma. I was wearing a KU shirt and hat, to which they told me to look at their car’s license plate when we got back to the parking lot (spoiler- it was ‘KUUUUUU’!).

The views were fantastic. We took photos, walked around, soaked it all in for about 15 minutes, and headed back to the car. Another 45 minutes passed and I thought I would never see the car again. We had less of a scenic drive back to Bentonville because we went a different way than through the mountains, but it was faster. The whole trip down and back from Hawksbill Crag consumed most of our day.

Tyler and I took a short break before heading to CB to go see the evening show for James Turrell’s Skyspace installation. The whole show starts right before sunset and lasts for about 30 minutes. It truly is an experience you have to visit in person. The pictures are not accurate as the in person experience. All I can say is that is an LED light show that transforms the light of the open oculus in the top of the installation.

After a four mile hike that contributed to walking 15,000 steps yesterday I decided to have another relaxing day off. Around noon I decided to go check out the newly opened Hurts Donut shop in Fayetteville before going to watch Wonder Woman. Donuts smelled and tasted heavenly. Wonder Woman was highly entertaining. Would recommend both! I went to Target to grab some things, kill time, and get some steps in… Did some laundry when I got home, crashed and burned out for the night.

Ready for another week of hard work and productivity!

One reply on “Got My Groove On”